There are a few photos floating around of Panzer Lehr Division Pz IVs in the town of St Gilles, about 6 km west of St Lô.

The Geoportail site has some fairly good images of the town from 1947, allowing a few details to be confirmed.

This Google Earth image shows the location of four Pz IVs, three in the town centre and one just to the north, along the current D446. 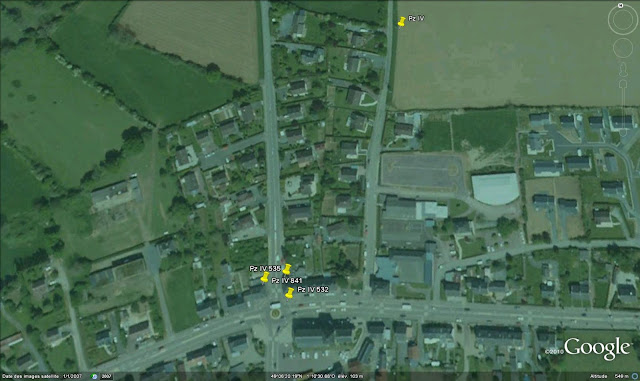 The wreck of this lone vehicle is still clearly visible on this aerial, taken in 1947: 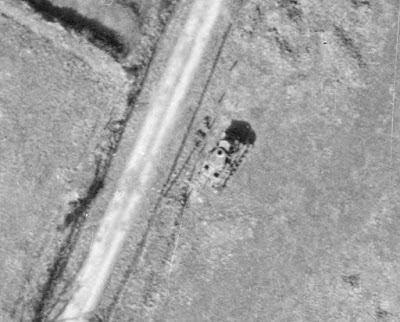 As for the three in the town centre, all are featured in several photographs.
Closest to the crossroads in the centre of town is 532, or rather, the remains of it: 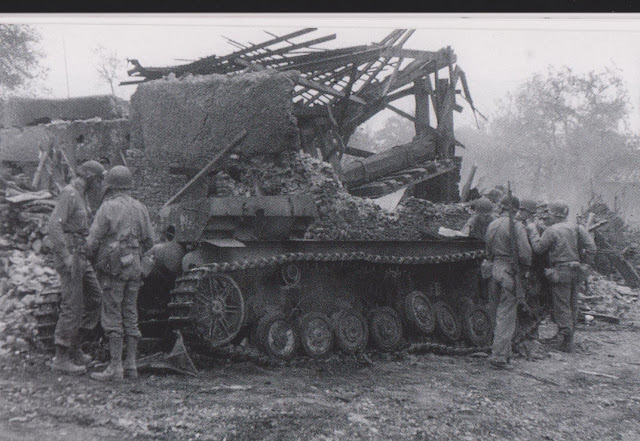 The devastation in the village is obvious.
The road in the background is the D77. In the centre of the frame, tucked away in the rubble, is 535: 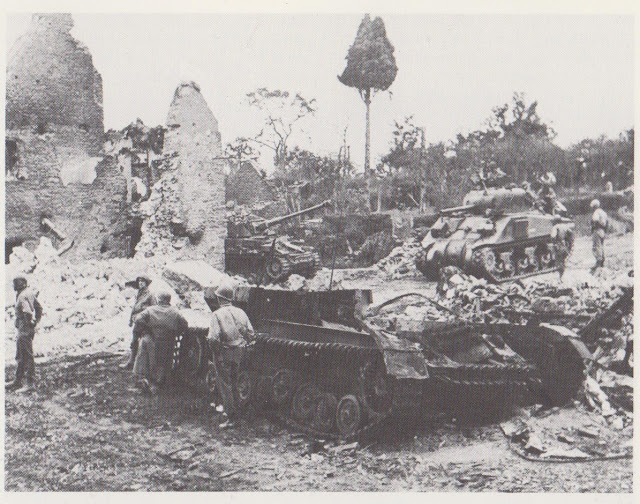 This earlier photograph of 532 also shows 535 in its original position covering the approaches to the town before it was manouvered into the gap in the buildingd to the left: 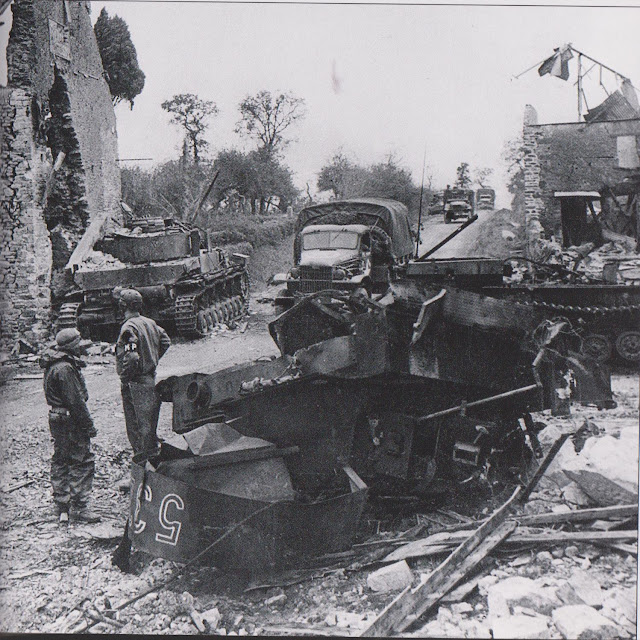 A later photograph showing 532 being unceremoniously piled into the remains of a building. In the background can be seen the turret of 841: 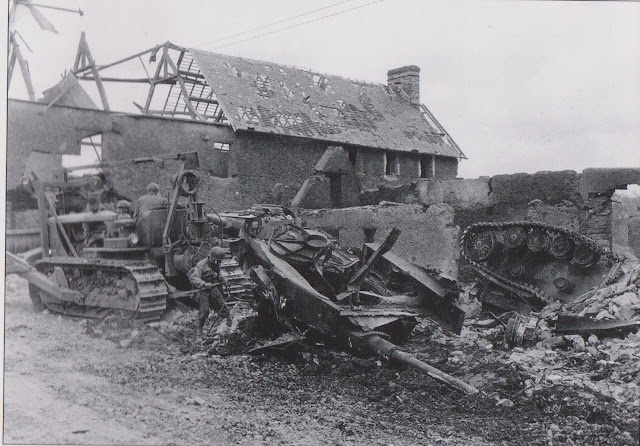 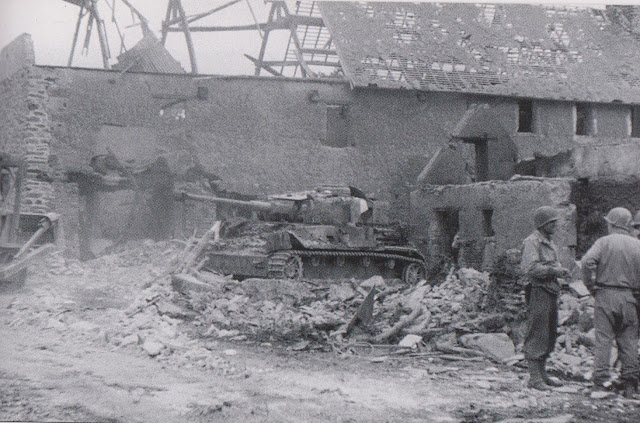 535 was knocked out by a direct hit on the front, between the driver and radio operators positions: 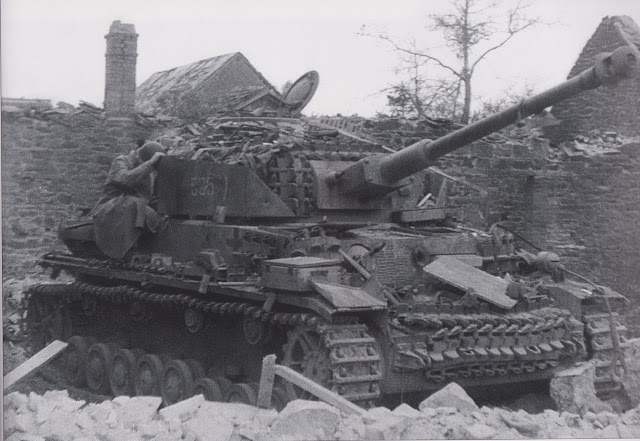 This view, from the rear of 841, confirms the location of both vehicles. The main road from St Lô to Coutances, which passes straight through St Gilles, is just visible between the buildings extreme left: 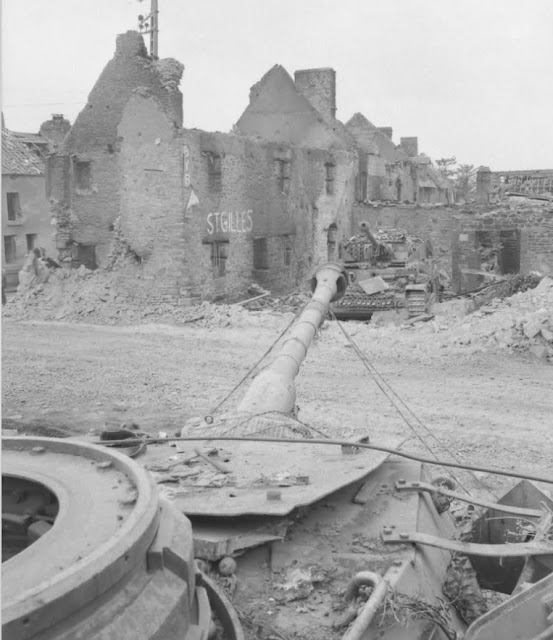 The damage sutsained by the town can be easily ascertained from this photo of the crossroads and church, again from 1947. The locations of 532, 535 and 841 are marked. Note the two large buildings either side of the D77 are now completely gone, with just their foundations visible. The shadow in the north west quadrant of the junction is that of the telegraph pole visible in the phot above behind the building with the temporary 'St Gilles' sign painted on: 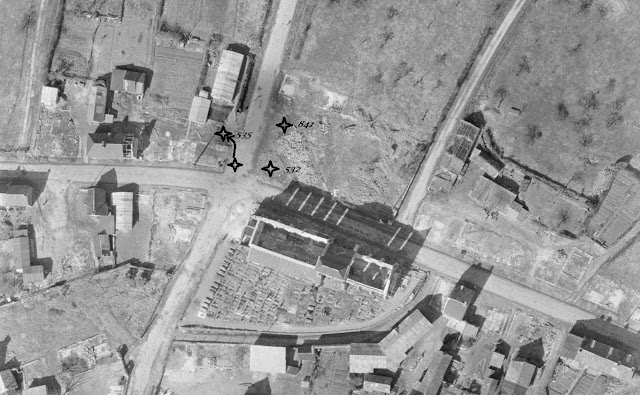 Some movie footage covers the entry into the town:

Some stills..... the first shows the remains of 532 with the church in the background: 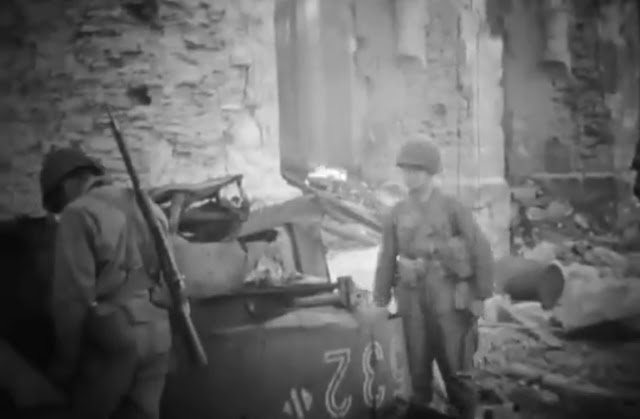 The cameraman appears to have moved a little to the east. The cemetery behind the church is now gone. this area is a small car park, the town cemetery is back down the road towards St Lô: 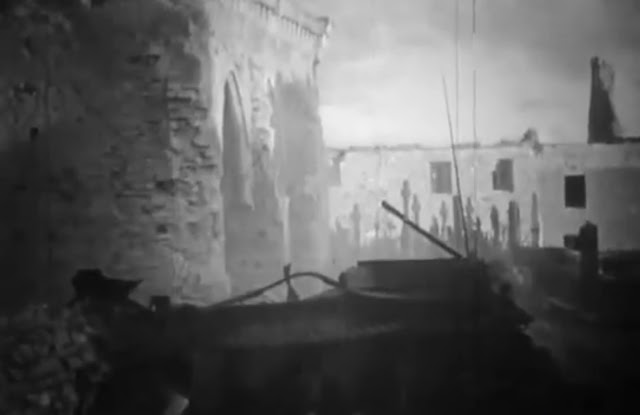 Looking north with the church on the right: 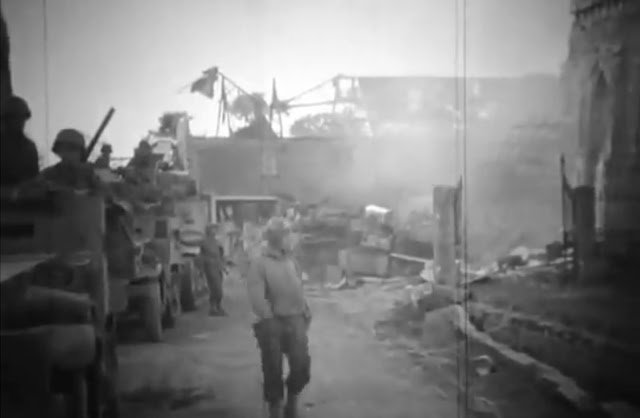 Back up the D77 looking south. The damaged roofs of the large building behind 841 and the church are visible on the left: 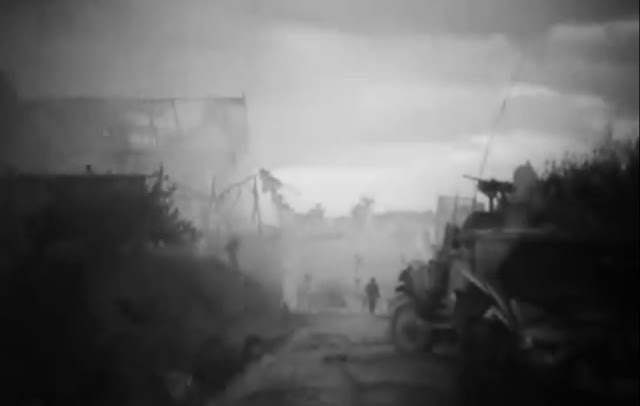 In George Wilson's book 'If You Survive' he describes his entry into St Gilles and the knocking out of a PzIV, on p.19/20:

"My platoon swung to the right across the fields and came into the village from the right, or west end, and headed toward the central crossroads. My men and I were walking on either side of the road following our lead tank into the little burg. As we approached I was on the left beside a high stone wall, and the first buildings were just ahead, not ten yards beyond the end of the wall.
Suddenly, a shell exploded inside the first building beyond the wall, and instantly I hit the dirt. When I looked up a few seconds later from my prone position in the brick gutter, a Jerry Mk IV medium tank was cutting around the corner only a short block away and heading directly toward me. Our Sherman tank and the Mark IV began to fire at each other at once from point-blank range. our tanks began to back up as it was firing, apparently looking for some kind of cover........
Finally, after an exchange of about a half-dozen ruonds each, the Jerry suddenly went up in flames. Two Krauts crawled out of the tank's belly escape hatch and ran back for the corner. Both were knocked down by machine gun fire from our tank."